The Batman v. Superman: Dawn of Justice Batcave is a playset that will make fans of both superheroes happy. The Batcave playset has four different levels for play and stands four feet tall so it provides the perfect setting for children to act out all their favorite scenes from the Batman v. Superman movie.

The playset also comes with a six inch Bruce Wayne figure that’s already dressed in his iconic Batman costume, just like in the movie. Children of all ages will easily be able to see that Mattel paid plenty of attention to the details when designing this action figure.

The completed character really does look like the character in the movie. The first level of the Batcave has a training room which comes complete with a punching dummy so that Bruce Wayne can practice his moves when he’s not busy defending the city.

Across from the workout room is the garage, which stores the Bat Mobile. Between the two rooms is an elevator that kids can use to move their action figures throughout the house.

On the second level, there’s a green jail cell that’s big enough to hold Batman’s enemies. Across from the cell, players will find a room that houses Batman’s costumes so that he’s always prepared for his next crime fight.

These costumes are attached to the wall and can’t be moved but they do give a realistic feel to the design. The third level of the Batcave has a command center with screens that let Batman monitor the city both day and night.

But what’s most exciting about this room is that it features a trap door. If an enemy tries to attack Bruce in the command center, he’ll fall through the trap door into the green jail cell on the second floor.

The fourth level is the one that has the beloved Bat signal light. Kids can swivel the symbol to shine the light in the night sky. If Batman senses an enemy attacking from the sky, he can launch missiles from the nearby cannon and defeat the villain’s plans.

One of the most exciting features of this Batcave playset is that it has a working zipline. Children will enjoy zooming Batman along the zipline as he rushes to save his fellow citizens. Expect to see this area of the playset get the most use because it’s so cool. Kids (and, yes – even adults) will want to play with the zipline again and again.

Besides a beautifully designed Batman action figure, this playset comes with over twenty different accessories. This gives the Batcave plenty of repeat play value and ensures that kids will spend hours acting out various superhero storylines. 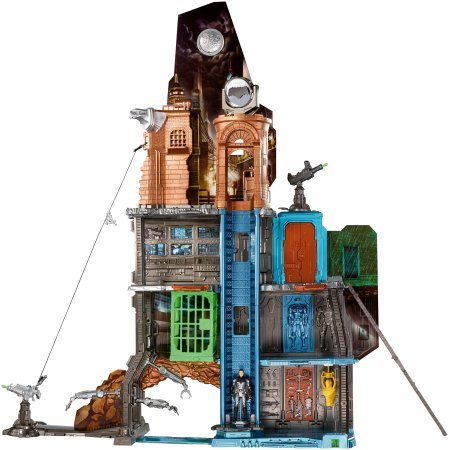