With the addition of the Half Shell Headquarters Playset, kids get a fun toy that will spark their imagination and they’ll spend hours playing with it. These iconic comic book heroes became beloved characters from the very moment they were introduced.

Some people think that these characters haven’t been around that long, but they’ve actually been in existence since the first comic book edition featuring them was produced in the 80s.

Kids loved them right from the start and getting your child the playset will be sure to thrill him. This toy features the latest adventure for the turtles. The Half Shell Headquarters is a playset that comes with four levels that look and feels like their iconic storm sewer headquarters when the turtles were first brought onto the scene.

The top level is designed to look just like a street. It has a red fire hydrant and a manhole cover. But once they move the top of the manhole, kids will discover something fun.

They can take their action figures and put them in the hole so that they slide down to the main level. On the main level, there’s a refrigerator and oven, along with a small space that’s the perfect place for the turtles to eat their pizza.

There’s also another manhole cover here, too. Instead of opening up to a secret tunnel, this cover works to flip the action figures up into the air. It’s the perfect launch for a mid-battle special effect.

On the bottom level of the playset, kids will discover a jail cell. This means that kids can pretend to track Shedder and his crew. Once they’ve caught these bad guys, they can put them behind bars until it’s time for the next adventure.

To have even more fun, kids can expand the Half Shell Headquarters playset by pulling on Raphael’s hands. When it’s fully expanded, the playset has a width of twenty inches. This makes it big enough for two or more fans to play comfortably together.

But when kids are done with the Half Shell Headquarters toy, parents can fold it back up. This makes it easy to store and saves space. Included with the playset are two action figures, Raphael and Bebop.

In the show, Raphael and Bebop are enemies that don’t get along, so these two characters are sure to inspire lots of playtime ideas. While there are no other action figurines are sold with this playset, you can still find plenty of TMNT figures for sale.

The Teenage Mutant Ninja Turtles Half Shell Headquarters Playset also comes with a green barrel cart with a ‘Pizza Express’ sticker on it. The turtles can use this green barrel to ride through the sewer tunnel and head out on their latest mission or go pick up a hot slice of pizza from their favorite place. 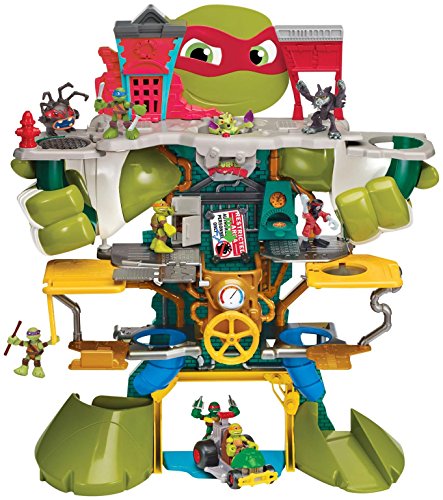 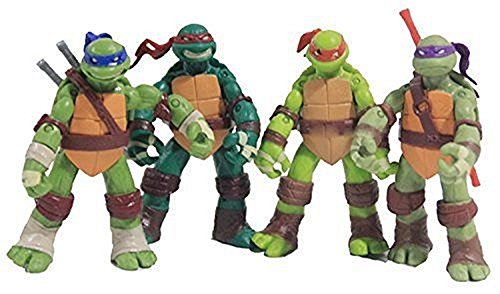